Wednesday, June 4th, 2014 and is filed under Oil and Gas Current Events 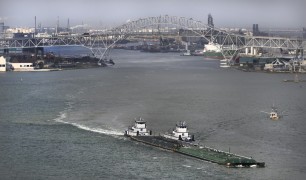 Accelerating vitality from the Eagle Ford Shale play has put the Corpus Christi economy on afterburners. Prices for waterfront land in the Coastal City have tripled to roughly $300,000 per acre. After years of outmigration, job growth in the region is surging, with the addition of some 19,000 positions since 2009. Retailers and restaurants such as Dick’s Sporting Goods, Jared’s Jewelers, Longhorn Steakhouse, DSW Shoe Warehouse and Corner Bakery are flocking to the region. Even Costco Wholesale is kicking the Corpus Christi tires.

What’s fueling this dynamism? Surging Eagle Ford Shale production. Located some 70 miles south of the formation, Corpus Christi is strategically positioned geographically to capitalize on Eagle Ford riches. Crude converges on the city via pipeline, truck, and rail before it’s loaded onto coastal barges and tankers. Since two-thirds of the city’s refining capacity is designed to process thick, high-sulfur crude, most of Eagle Ford’s low density, low-sulfur production must be shipped to other refiners. Hence, the vigorous port expansion.

Outbound crude from the port eclipsed inbound shipments by the summer of 2013. Port data reveals some 350,000 barrels of crude per day were shipped out in November 2013, up from just 10,000 barrels at the onset of 2012. Up until 2011, the Port of Corpus Christi had almost no outbound oil shipments.

Roughly 16.4 million barrels of crude moved out of the port in January 2014 alone—80 percent of it to Texas and Louisiana refineries along the Gulf Coast. The rest made its way to places like Philadelphia, Newark, and Quebec (U.S. law bars crude oil exports, but the Commerce Department issued waivers for exports to Canada).

These accelerating flow levels have sparked a port construction boom with some $22 billion in projects underway or on tap. Switzerland-based Trafigura, an international commodities trading firm, is planning a $200 million expansion of the port terminal and oil storage facilities it acquired after purchasing Texas Dock & Rail in early 2012.

But there’s more. Lured by cheap natural gas and truck, rail, and barge access, Austrian steel giant Voestalpine is investing $740 million in a port facility with the capacity to produce two million tons of hot briquetted iron annually. TPCO America Corp., a subsidiary of Tianjin Pipe Company of China, recently broke ground on a $1.1 billion seamless pipe plant adjacent to the port. The plant will have a capacity of 500,000 tons of pipe annually when it comes online in 2016. Seamless pipe is used primarily for oil and gas well casing.

Outside of Houston, Corpus Christi is fast becoming the most important energy hub in the U.S. It currently ranks fifth in the U.S. by tonnage. And with development poised to surge on the Mexican side of Eagle Ford coupled with Corpus Christi’s relative proximity to Monterrey, the Coastal City should be on afterburners well into the future.