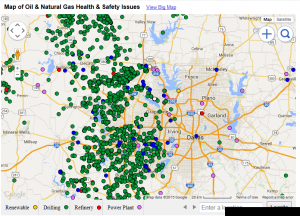 Texas lawmakers recently approved a $4.5 million to study a succession of earthquakes that rocked the Dallas Fort-Worth area at the beginning of the year. Purpose: to explore what—if any—connection the temblors have to oil and gas production. The region is home to the Barnett-Shale formation, a play rich in natural gas reserves.

But is there a strong correlation between seismic activity and oil and gas production? A recent study released by Southern Methodist University in Dallas suggests there is. SMU researchers contend a recent cluster of small quakes in the Fort Worth suburb of Azle between November 2013 and January 2014 are linked to waste water injection wells. Fault lines act as pathways for pressure changes that can course to critically stressed areas, triggering the temblors, SMU researchers claim.

But representatives from Exxon and its gas subsidiary XTO Energy dispute these claims. They presented evidence to regulators that the quakes that struck one suburb originated far deeper that the depth of a nearby injection well. EnerVest, a firm that operates a well linked with the Azle quakes, showed evidence the quakes occurred as deep as 20,000 feet. That’s far deeper than the injection wells, which are drilled to depths of roughly 7,000 feet. 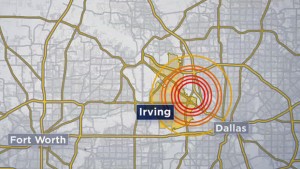 The Irving quakes that struck in early January 2015 were centered just east of the site of the Dallas Cowboys former home field, Texas Stadium. The two quakes registered 3.5 and 3.6 on the Richter scale—large enough to be felt miles away.

“It’s hard to believe that a frack job that took place many years ago would be resulting in earthquakes today,” seismic researcher Michael Brudzinski said in an interview with Dallas public radio station KERA. Brudzinki suggested North Texas seismologists drop fracking as a credible quake suspect.

A Texas Railroad Commission database lists some 14,000-injection wells scattered across the 5,000-square mile Barnett Shale Play. Yet just 0.1 percent of these wells is correlated with any seismic activity. But that isn’t stopping anti-fracking groups from seizing the alleged linkage as an “opportunity to organize and win behind enemy lines.” Other anti-fracking activists are promoting the term “frackquake.”

But correlations do not equal causation. At around the same time earthquakes struck Irving, a swarm of quakes rocked Connecticut over a single week. There currently is no fracking activity in that state.