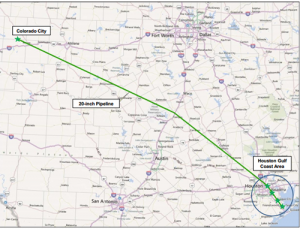 Is the Permian Basin a victim of its own stunning success? Oil production in the Permian, that petroleum rich landmass straddling Texas and New Mexico, has been wrestling with takeaway capacity over the last 18 months. Production consistently outpaces the ability of Permian producers to deliver the commodity to shippers and refineries. That, coupled with recent refinery outages, has forced West Texas producers to swallow deep discounts whenever current pipeline capacity is squeezed.

But that bottleneck conundrum may soon be lifting. On September 29 the BridgeTex pipeline, a 400-mile $1 billion crude conduit, went online. A joint venture between Tulsa, Oklahoma-based Magellan Partners and Occidental Petroleum, the BridgeTex Pipeline spans from Colorado City, Texas, to the Houston Gulf Coast. The pipeline has a robust capacity of 300,000 barrels per day. Launched in 2012, the project also  includes 1.2 million barrels of storage capacity in Colorado City and another 1.4 million barrels in Houston.

America’s Production Juggernaut
The Permian Basin is the leading oil-producing region in the U.S., generating some 1.75 million barrels per day (October 2014), according to the Energy Information Administration. In 2012 the Permian generated more than $137 billion of economic output and sustained more than 546,000 jobs, according to a study released by Texas Tech University and the Permian Basin Petroleum Association. Those figures have no doubt increased substantially.

Of the 1,591 oilrigs operating in the U.S., the majority—or roughly 554—is located in the Permian. The Eagle Ford Shale formation has 202 oilrigs, while the Bakken Shale formation in North Dakota has 198 and the Mississippian Lime Formation (Northern Oklahoma into southwestern Kansas) is home to 74. So far in 2014 the Permian Basin has added a whopping 95 oilrigs to the Bakken’s 13. Eagle Ford is actually down four rigs.

Crunch Not Over
But while the BridgeTex pipeline will go a long way toward alleviating Permian takeaway bottlenecks, the area still has transport challenges. Most new production lies in the Midland and Delaware basins—well to the west of Colorado City. This means crude supplies from these Western basins must get to Colorado City before they can enter the BridgeTex pipeline and on to shipping and refining outposts.

Most of the existing pipelines that can accommodate transit to Colorado City are at or near capacity, meaning much Permian production is still constrained. These restrictions should be relieved in January 2015 when crude oil will begin flowing along the Plains Sunrise pipeline (250,000 barrels per day). The Plains Sunrise links Midland to Colorado City—and the Permian’s most robust basins to BridgeTex and beyond.