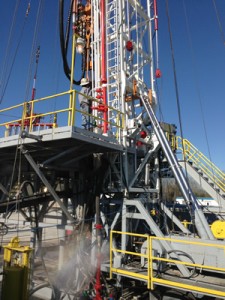 The Permian Basin, one of the most productive oil producing areas in the world, is buzzing with activity. Here is the latest in Permian Basin news.

“The Noodle Canyon #1 is just one of several conventional projects underway for us in Texas,” said Brandon Laxton, President and CEO of Aresco LP. “While unconventional exploration may get all the headlines, we are finding success exploiting conventional fields with years of proven production, which helps manage the exploration risk for our operating and capital partners. We benefit from the decades of production and decline curve data available in the area and increase our overall potential with the addition of modern efficiencies in drilling and completion.”

The Permian Basin International Oil Show kicks off in less than a week and organizers say this is the largest and biggest show to date.

“We have expanded our exhibit space,” said Larry Wadzeck, president of the show. “We have 444,000 square foot of exhibit space, we have an additional 40 exhibitors than we’ve had in the past. It’s our largest and biggest show we’ve ever had.”

The show comes to the Permian Basin every other year and Wadzeck said he has been working with a team of almost 200 people since 2012.

This year’s theme: go with the flow.

Organizers hope Oil Show will offer something for everyone in industry

Seeing the success of Tulsa’s international oil show in the 1930s, a group of Odessa supporters wanted to duplicate that success in Odessa.

After an intensive lobbying effort, the group won the right to host an oil and gas industry trade show they dubbed “The Little International Oil Show.” First held in 1940, it included 35 exhibitors and was held in Floyd Gwinn Park.

World War II intervened, but in 1950 the show was revived as the Permian Basin Oil Show, held in even-numbered years. It has outgrown its Tulsa inspiration to become the world’s largest onshore oil and gas trade show. In 1994 it was renamed the Permian Basin International Oil Show.

Read more: Organizers hope Oil Show will offer something for everyone in industry

The Midland Reporter-Telegram reported October 10 that the Texas Permian Basin Petroleum Index in August was up 10.3 percent over the same period the previous year, driven by record drilling permits and a high rig count, despite softening oil prices. The state’s Railroad Commission issued a record 1,179 drilling permits this August, 70.6 percent more than the 691 issued in August 2013. Employment figures, too, remained excellent, with the August average of 33,670 topping last August’s numbers by 11.3 percent. Employment in the Permian oil patch is up 8.6 percent so far this year over last year’s average.

“Obviously, these kinds of numbers make it very clear that the West Texas oil boom is far from over. It has not even begun to slow down,” said TAYO CEO Scott Wheeler. “Our company remains committed to capitalizing on this historic economic expansion by investing in the kind of real estate that is absolutely necessary for the communities in West Texas to handle this kind of incredible growth.”

Read more at West Texas Oil Boom Far From Over as Employment, Drilling Permits and Rig Count Keep Going Up

Why the Permian Basin is important to US oil

The Permian Basin is located in western Texas and southern New Mexico. The name “Permian Basin” usually refers to a combination of the Delaware Basin and the Midland Basin. According to the U.S. Energy Information Administration (or EIA), the Permian Basin is the largest crude-oil-producing region in the United States.

Currently, there are 1,609 oil rigs at work in the U.S. The majority of the rigs, roughly 560, are in the Permian Basin. The Eagle Ford has 202 oil rigs, the Williston and Bakken have 194, and the Mississippian has 78.

Investing in the domestic oil and gas industry can be a rewarding experience for private individuals with the financial, investment, and emotional maturity for investing outside the mainstream. As many accredited investors actively seek viable opportunities, we believe that our partner-friendly approach and unparalleled dedication to communication set us apart from other companies.

We would love to opportunity to talk to you about our investment opportunities.

But first, we would like to introduce you to the core principles that define our way of doing business.