Billions of dollars have been pouring into the Permian Basin in recent years as pipelines rush to help producers move their crude and natural gas to market.
Despite the investment in new pipelines and gathering lines and expansion of existing lines, takeaway capacity remains tight and producers are increasingly turning to the railroads for relief.

Using trains to move crude to market is nothing new, points out Bruce Carswell, West Texas operations manager for Iowa Pacific Holdings. “There has been, over time, crude oil moving by rail out of the Permian Basin almost since the beginning” of oil production, he said. 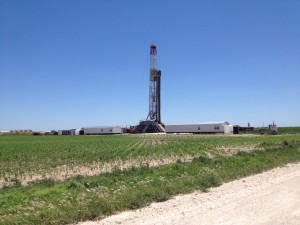 It’s been roiling at a vigorous boil since 2008. That’s when U.S. tight-oil (light crude trapped in geological formations of low permeability) production exploded: from 600,000 to 3.5 million barrels per day at the start of 2014. Thanks to the deluge of hydrocarbon resources from shale formations, petroleum is once again turbocharging U.S. economic growth.

Thank the innovative technologies of hydraulic fracturing (“fracking”) and horizontal drilling for this success. The boom began in the 1990s, when the late oil and gas pioneer George P. Mitchell perfected and deployed hydraulic fracking processes to crack open gas reserves in the Barnett Shale field outside Fort Worth, Texas. Since then, the technology has burst the door open to shale development worldwide.

Only it hasn’t. These new technologies have dramatically increased the recovery of shale petroleum reserves in the United States, almost to the exclusion of the rest of the world. Why?

Technological advances in hydraulic fracturing and horizontal drilling have unlocked significant shale gas and tight oil resources in the United States. The use of these technologies, however, also has created infrastructure challenges such as a lack of pipelines and housing for workers.

Plains All American may build new pipelines dedicated solely to a very light form of crude oil known as condensate in parts of the Permian Basin in West Texas as output increases, an executive of the U.S. company said this week.

Infrastructure in the Permian is playing catch-up to areas like the Eagle Ford in South Texas, where such pipelines already exist, amid changing regulations for exporting the oil.

Oil is the lifeblood of the Permian Basin but that crude never leaves the ground without water and that’s what Oilfield Water Logistics provides.

The newly formed Dallas-based company, called OWL for short, uses a network of pipelines, disposal wells and recycling centers to handle up to 50,000 barrels a day from the West Texas oilfields. OWL is a portfolio company of Irving-based Natural Gas Partners, a private equity firm.

“OWL handles the full water cycle for E&P companies,” said Chris Cooper, CEO of OWL. “We’re primarily focused on the Permian but we’re looking to expand to other basins.