The south Texas Eagle Ford Shale production numbers in crude oil are pushing the state closer to the world’s top oil producing spot and is drawing the attention of investors. Only Russia and Saudi Arabia consistently outproduce Texas in crude oil in the world. Iraq and Texas has been moving in and out of the number three spot as crude production fluctuates. Though we still don’t know just how much the Eagle Ford is capable of producing, it is clear Eagle Ford Shale production numbers, and other regions like it, are putting the United States on the path to energy independence. 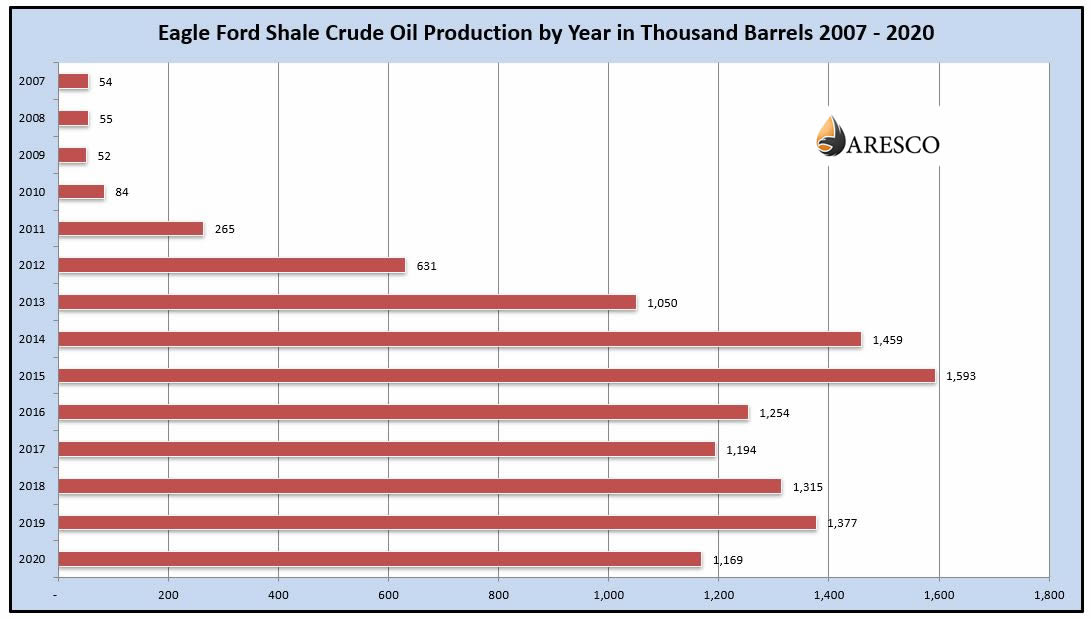 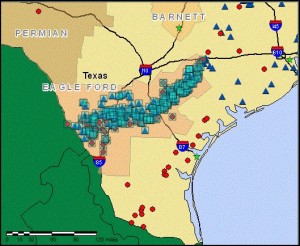 This 400 mile long shale formation has become one of the most active shale plays in North America, and experts say its full production capacity may still be several years away. In May of 2021, the active rigs producing in the Eagle Ford shale region was only 35 rigs, which was substantially down from the peak active rig count in May of 2012 when the count was close to 300.  However, there are over 1,000 DUC wells (Drilled Uncompleted) in the region, which is over three times the amount of active wells during the peak active rig count. Considering the number of wells that could completed and producing in short order, the full potential of crude oil and natural gas production from the area could be quite a windfall for investors.

The Eagle Ford Shale produces natural gas and yields more crude oil than many other shale plays. This is because it contains higher percentages of carbonate shale, which is more brittle and easier to frac. Due to the high carbonate shale content and the sheer size of the formation (roughly 50 x 400 miles), the Eagle Ford Shale has become one of the largest oil and gas development areas in the world in terms of investment capital.

Tens of billions have been invested in development in the Eagle Ford Shale over the last few years, with around $30 billion spent on drilling and infrastructure in 2013 alone. All of this investment has made it possible to unlock huge deposits of oil that were previously thought to be unrecoverable. As a result, the Eagle Ford has, along with the Permian Basin, played a large part in Texas more than doubling its crude oil production since 2009.

It is expected that investment capital will continue to flow into the Eagle Ford area for years to come.

Aresco is active in the region with ownership in 5,600 mineral acres with multiple drilling prospect locations. We actively seek developmental drilling projects using new, yet proven, technologies throughout Texas and New Mexico. Read more about what sets Aresco apart as an industry partner in Oil & Natural Gas Investing with Aresco, LP.

If you are interested in learning about how to invest in oil & gas, download our free white paper, Oil & Gas Interests Explored for more info.