Wednesday, March 5th, 2014 and is filed under Oil and Gas Current Events

In the realm of Texas oil and gas production the year 2013 was a big. Very big. According to the Texas Petro Index, the Lone Star State churned out $110 billion in oil and gas production. The index, a composite measure based on several exploration and production economic indicators, hit 295.0 in December 2013, up 6.7 percent from the previous year and shattering the previous high of 287.6 set in October 2008.

Just about all of that growth was driven by crude oil, which totaled 856.8 million barrels for all of 2013— 31 percent of all U.S. oil production and the highest statewide total since 1985. But that bottom line figure enjoyed a boost from higher wellhead prices for natural gas as well. 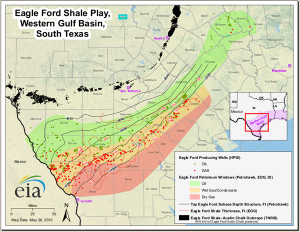 A big driver in this booming oil and gas success is the Eagle Ford Shale formation. Producing gas and more oil than traditional shale plays, Eagle Ford went from a mere average of 352 barrels of oil production per day in 2008 to an astounding average of 688,429 barrels per day in 2013. That’s a growth rate of nearly 2000 percent in just five years. In fact the pace of Eagle Ford growth has been so brisk, it beat the more mature Bakken Shale field in North Dakota to the 1 million-barrel-per-day oil production milestone in August of 2013.

Eagle Ford was initially seen primarily as a source for natural gas. But as gas prices plummeted operators began successfully pulling oil from sections of the Eagle Ford formation using horizontal drilling and hydraulic fracturing techniques originally tested in North Texas’ Barnett Shale. Eagle Ford spans through all or part of some 25 Texas counties, covering an area roughly the size of West Virginia. Its 50 mile-wide crescent shape stretches 400 miles from the Texas-Mexico border up toward Dallas County.

Named after the town of Eagle Ford near Dallas, the oil and gas rich formation was first tapped in 2008 by Petrohawk Energy— a Houston-based independent oil and natural gas company. Houston-based Petrohawk was acquired by BHP Billiton for 12.1 billion in 2011.

Eagle Ford investment is expected to surpass $116 billion by 2015 and is likely to become the largest oil field ever discovered in the lower 48 states. Eagle Ford also has the potential to be the largest natural gas field ever discovered in Texas. Today, more than 7,000 existing or planned oil and gas wells have been drilled or are in the planning stages along the shale formation,

Eagle Ford— together with the Permian Basin—is driving an oil and gas boom that could make Texas one of the leading oil producers on the planet. Texas is projected to produce more than 3 million barrels of oil per day in 2014, catapulting the Lone Star State past Mexico, Iraq, and Kuwait to become the 8th largest oil producer in the world.

If you would like to learn about how to invest in oil & gas in the Eagle Ford Shale area, see our free white paper “Oil & Gas Interests Explored – Pathways to Profit“.