Wednesday, January 29th, 2014 and is filed under Oil and Gas Current Events 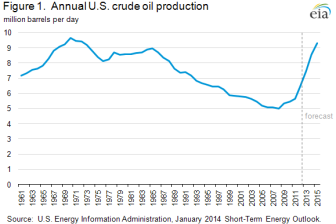 Production from tight oil formations in Texas, North Dakota, and a handful of other states has driven total crude oil production growth for the past four years. Development activity in these key onshore basins and increasing productivity as companies learn how to apply hydraulic fracturing techniques more effectively and efficiently are central to STEO’s forecast. In particular, EIA expects most growth through 2015 to result from drilling in the Bakken formation in North Dakota and Montana, the Eagle Ford formation in Texas, and the Permian Basin in Texas and New Mexico. Bakken production is expected to rise from the estimated December 2013 level of 1.0 million bbl/d to 1.3 million bbl/d in December 2015. Eagle Ford production is projected to increase from an estimated December 2013 level of 1.2 million bbl/d to 1.5 million bbl/d in December 2015. The Eagle Ford accounts for more than half of the onshore domestic liquids production growth because of a comparatively large amount of liquids coming from both oil and gas wells compared with the other key production basins.