Exxon Mobile and Saudi Aramco have developed technology that transforms crude oil directly into ethylene, bypassing the step of converting crude oil to naphtha. Ethylene is widely used in the petrochemical industry – one of its main uses is to make polyethylene or plastic. This technology could revolutionize the petrochemical industry and save hundreds of millions of dollars in processing costs.

The primary feedstock for the majority of petrochemical plants outside of the U.S. is naphtha. Petroleum naphtha is an intermediate hydrocarbon liquid stream derived from the refining of crude oil – basically step one in the refining of crude oil towards making gasoline or plastics. Naphtha is then converted to ethylene in order to produce plastics, resins, and chemicals. Since naphtha is more expensive than crude oil, this new technology has the potential to save up to $200 per metric ton of ethylene according to an engineering analysis conducted by IHS. 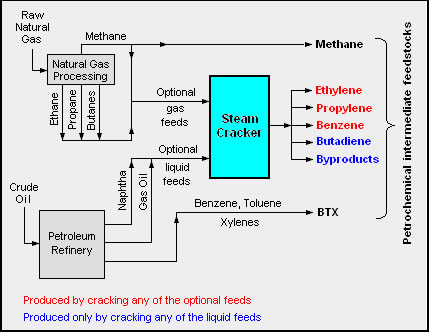 In an IHS press release, it says:

The ExxonMobil process completely bypasses the traditional naphtha cracking process. Saudi Aramco has its own process for crude oil to olefins, and in June 2016, Aramco announced a joint venture with SABIC to study building a ‘crude oil-to-chemicals’ complex in Saudi Arabia. Though the exact process configuration for the potential joint-venture was not disclosed, it is possible this complex will employ the Aramco process, at least in part.

According to the IHS report, the ExxonMobil process completely bypasses the refinery and feeds crude oil to the cracking furnaces. These have each been modified to include a flash pot between the convective and radiant sections of the furnaces. Next, the crude oil is pre-heated and then flashed, IHS said, essentially ‘topping’ the lighter components from the crude.

This extracted vapor, the IHS report said, is then fed back into the furnace’s radiant coils and cracked in the usual fashion. The heavier liquid that collects at the bottom of the flash pot is either transferred to the adjacent ExxonMobil refinery, or sold into the merchant market.

The author of the IHS report was Anthony Pavone, director of engineering at IHS Chemical.